Casting out Casteism: Can you???

"Em Pilla, meeru evaru??" ("Hello girl..., who are you?", here 'who are you' signifies 'what caste you belong to'); this was among the first few questions asked when I entered my hostel, some 4 years back. I was not used to this type of questions. I'm brought up in a locality where almost people from most of the religions and most of the states live together. This question sounded odd to me...
Nevertheless,  I answered "Hmm.. Brahmin... why?"
She was startled.. That's what I understood from her reaction.
She asked "enti? Brahmin aa?" (What!, Brahmin?) giving some extra stress to the word "Brahmin".
"Why? What happenned?", I asked again.
"Ah.. Nothing re... You don't look like a Brahmin, so...", she said.
"Oh, is it??, By the way, I don't know how Brahmins look like... Please explain", I asked.
She smiled this time and said, "Don't mind, but brahmins are generally of a fairer complexion".
LOL, what an idea to identify the caste...  My mom says, "A TRUE BRAHMIN is one who has acquired brahminhood not by birth but through his noble actions." "Brahmin" in real sense means the one who has Brahma Gnana. It is not a caste. Ask anyone in today's generation and most often reply would be "One who eats only vegetarian food"... you may also get some weird replies like the man who has a V shaped or three horizontal Tilakams on forehead, or the man who wears a sacred thread (Woman, by default, is not of much importance in Indian society, she is known by the name of either father or Husband).... or  in worst cases as in the above incident "One who is of a fairer complexion!"


India has been a land obsessed by caste and has been unable to rise above it.  It is known to be “world’s biggest democracy” and ironically it is “world’s biggest social segregation" as well.  The caste system - a subtle and deeply rooted system of social differentiation and segregation - is without a doubt an exact opposite to the fundamental ideals of democratic practice.

I keep wondering why in this age, the great people of a great nation, can still be trapped in such a system of social segregation against fellow countrymen/women as caste. 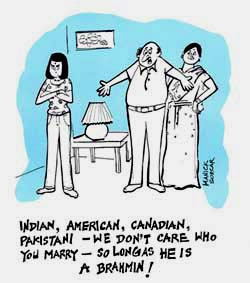 Most of the people in "so-called" modern society keep on flaunting to be heretic, but the fear of acceptance in their society makes them think the way presented in the cartoon here:  (The word "Brahmin" in the below cartoon can be changed with Reddy, Choudhary, Iyer, etc... etc... all the castes present). We forget that Society is made for man and not vice-versa. Take the recent worst cases of honor killings - C
We - Indians boast a lot about having "UNITY IN DIVERSITY" but India is so much largely divided in terms of caste, region, religion, language and communities that Unity in true sense is next to impossible.
I dream of seeing a day in my life when people say that "I am a world citizen and the world is mine...Only 1 Caste exists and that is Humanity". Reminds me of a dialogue in Hindi Movie My Name is Khan where hero's  mother says, "The only difference between people is that there are good people and there are bad people."